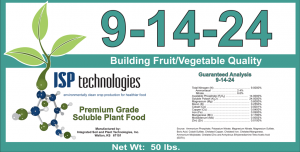 As ISP became more involved with produce, another product to compliment 10-20-20 for setting fruit was needed.  Originally designed primarily for strawberries, it is now widely used with virtually all produce crops.  With the nutrient ratio being a little higher in potassium, it provides a balanced package while at the same time recognizing that produce crops require very high levels of potassium.

In addition, while all the trace minerals are present, it is formulated with higher levels of both magnesium and manganese … two common areas of deficiency in our general market area.  It is also a “high energy” product due to its higher than normal levels of sugars.  It can be applied as either a fertigation additive through drip lines, or as a foliar with virtually no “burn” when used as directed.

Scroll back to top