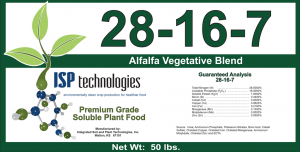 28-16-7 Alfalfa is a slightly different version of the standard 28-16-7, with the differences being primarily in the trace mineral package.  “Alfalfa” blend has a higher boron content, which is highly advantageous for alfalfa.  In addition, both manganese and magnesium are somewhat higher, which is based upon the geographic area where the majority of this product is used.   28-16-7 Alfalfa Blend is an example of how ISP is continually studying the marketplace, product response and performance, and when it’s clear that a product can be improved or enhanced … then we make it available.  The product is designed to be applied to alfalfa once the hay has been removed, or when there is at least ½” of regrowth.  The vast majority of 28-16-7 Alfalfa Blend is foliar applied.