Pumpkins and winter squash are a bit different than most annual vegetables, in that many growers plant them without irrigation or fertigation.  It should be said that growers that do fertigate have a large measure of insurance against the often-harsh summer growing season.  Pumpkins can be direct seeded or transplanted in plastic mulch, bare soil, or even no-tilled or strip-tilled into a killed cover crop.  All methods have shown success.  There is no doubt that our summers are getting hotter, so adding a drip tape to your management program will ensure a greater degree of reliability and opportunity for success.

Fertility & Soil pH: Pumpkins and winter squash require 50-100 units of N, 100 units of P, and 150 units of K across the entire season.  Apply 50% of these nutrients prior to field preparation or bedding up for plasticulture (50 units N, 50 units P, and 75 units K).  They will tolerate a wide range of pH but perform best at 6.2-6.8.  Also apply 120-150 pounds per acre of MgSO4 (Epsom Salts) per acre preplant.  To aid in controlling stress stemming from environmental factors, a per acre application of 12-16 fluid ounces of MetaboliK HV-1, and 32 fluid ounces of PhytoGro Xtra is recommended.  They may be broadcast across a field if reduced tillage is part of the management program.  If beds are tilled and prepared as in the case of plasticulture, then they should be either band over the bed, or broadcast and incorporated as part of preparing the bed prior to the laying of plastic.

It should be noted that this program is presented as a guideline only based upon research and the experiences with a number of growers.  With the wide variances possible from both soil types and environmental conditions present during any particular season, your actual recommendation can vary from what is presented.  It is always advisable to discuss actual management practices with your local ISP specialist.

The program in the table is designed for pumpkins, gourds and winter squash with 90-120 days to harvest, and more or less average weather.  Prolonged cool, cloudy periods will add days to the schedule, and extreme heat can shorten the schedule.  Tissue testing at two critical points in the season will greatly improve managing the crop to a great harvest. 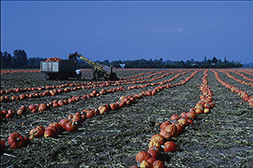 Dryland: Apply the remaining dry (bulk) fertilizers at the beginning of vining season as a side dress application.  The downside of this type of application is the potential loss of nutrients and stream pollution in heavy rain events.  Dry growers can still gain the benefits of increasing Si levels for insect and disease management by including SiGuard or SiMag58 in all pesticide applications.  Increased Si levels have been proven to reduce PM and other diseases.  SiGuard and SiMag58 are both excellent sources of Si that can be both fertigated and applied through foliar applications.

Irrigated: For fertigated and plasticulture fields, begin fertigation two weeks after transplanting.  If direct seeded, begin fertigation as soon as the first true leaves (not seed leaves or cotyledons) emerge.  The goal is to apply approximately another 50 units of N, 25 units of P, and 75 units of K before September.

Apply MetaCal, or CalStore through the fertigation system weekly when not applying any P containing nutrients.  Fill irrigation lines with water, inject CalStore or MetaCal, then flush lines with clear water.  This will ensure that no clogging precipitates are formed and that your developing fruit get plenty of Ca in balance with Mg.

Since foliar diseases such as powdery mildew (PM) are often a major problem for winter squash and pumpkins, the addition of highly available silicon materials (Si) is strongly recommended in all pesticide applications.  Increased Si levels have been proven to reduce PM and other diseases.  SiGuard and SiMag58 are both excellent sources of Si that can be both fertigated and applied through foliar applications.

Flowering/Fruiting Forms: The initial flush of flowers on pumpkins, as well as most vining crops, will be almost all males.  There are several scenarios that lend itself to low numbers of female flowers, which of course are the only flowers capable of forming fruit.  (see photo at left.)  Especially hot periods during the summer can stress vines substantially so that they produce few if any female flowers.  Excessive nitrogen will also encourage the formation of male flowers.  For larger “jack” pumpkins, the ratio of male to female flowers will ideally be from 10-12 males to each female.  For smaller pumpkins and winter squash, this ratio should be closer to 8-10 males per female form.  These ratios should begin to be present once vine development has reached four to five feet.  (it should be noted that optimum plant production will result in higher fruits set, with some of them not achieving maturity and/or aborting.  These immature fruits act somewhat as a “storehouse” of nutrient to aid with maturation of primary fruits.)

If males are still dominant at this stage of development, foliar 10 pounds per acre of 0-36-30, and 4 ounces MetaboliK HV-1 per acre.  In addition, the application of Si-containing materials (SiGuard, SiMag58) along with MetaboliK HV-1 will greatly reduce heat induced stresses and help to balance vines for better yields.  The addition of Si is beneficial when applying any crop protection foliar application.