Two years ago, we attended the National Potato Expo in Orlando, Florida and was a little surprised by the vast numbers of potato varieties, there was a range of flesh and skin colors, white, red, gold, blue, purple and all of the same varied possibilities of shape and size.  About the same time, I began noticing that many of the “upscale” chefs and restaurants were using the colored and fingerling potatoes in their recipes.

In addition to supervising annual research projects for ISP, I’m also continually looking for new market opportunities for our growers, especially those limited for growing space and needing a high income off of every acre.  I’m convinced that these specialty potatoes have that potential.

This past season we were able to put in a small project simply to learn more how several varieties grow, what yield potential might be, and how to progress further in developing a program to enhance potential yield.  Varieties included Pinto Gold, a new 2017 release from the University of Maine; French Fingerling: Russian Banana, a gold fingerling; and Magic Molly, which was offered as a purple fingerling, but seemed to simply be a larger purple potato.

All varieties with the exception of the Russian Banana showed a significant increase in the computer cwt per acre.  All data is an average of three reps except for Magic Molly with only one rep. 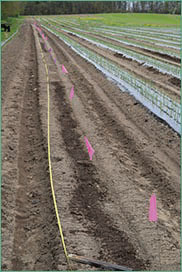 We divided seed pieces into approximately equal numbers in order to have both “control” and “treated” plots.  Treatment included on a “per acre basis”, 12 ounces of MetaboliK HV-1, 64 ounces PhytoGro Xtra (applied as a soak over the row at planting), and three foliar applications of 4-18-38 at a rate of 5 pounds.  (This foliar rate is less then what would usually be recommended, but we were simply using the foliar solution left over from the tomato projects).  This project was next to onions, and all the plots received the same nutrient as the onions.  This included dry preplant based on the sail analysis, 2 small rates of 28% N (may and June), and several July applications of 5-25-25.

Based upon the observations and yields that were achieved this season, we believe that there is certainly a positive potential of growing specialty potatoes.  Even through there is probably not a market outlet for thousands of acres at this point, there is potential for many of you.  At the Expo I was told that many of the fingerling potatoes could produce yields of up to 450 cwt per acre, and we came very close to that in our trials.

Recently I was at a local grocery and as I usually do, I was prowling through the produce section seeing what might be new.  I found fingerling potatoes, which was somewhat unusual, and they were retailing for $1.57 per pound.  Assuming a yield of 40,000 pounds per acre(400 cwt), and a wholesale price of perhaps $.60 per pound, this equates to potential income of $24,000 per acre.

This is less than some of our other produce crops such as tomatoes and peppers, but there is also a significant labor difference.  Tomatoes require intensive management and picking at least once per week, lasting several months during the season.  The demand for specialty potatoes is growing (especially in the gourmet markets); can be easily grown; and offers a good amount of income per acre.