MetaboliK SB showed a very strong response in the 2016 outside peppers and tomatoes trials at Howe, Indiana.  (Data published in the Winter issue of this newsletter.)  Seeing this, we decided to do further experimentation this spring, and are performing a couple of research projects with MetaboliK SB, studying emergence and early vigor on tomatoes and peppers.  Most produce crops are “time sensitive” with early prices being very strong, then dropping considerably once normal production comes to market, then strengthening again in the last season.  Any help in getting produce to market, even several days earlier, can be a strong economic benefit.

In addition, we all agree that vigorous emergence and early growth is important whether it be with produce or row crops.  Again, the question is what can we do to enhance this critical stage of plant development? MetaboliK SB has proven for more then a decade that it performs extraordinarily well for this purpose, and is probably our most widely used product.  To a fermented molasses base a concentrated bio-brew has been added, plus a variety of proven root stimulants and vitamins, and a specific blend of trace minerals.  There’s also a 3-4-3 macronutrient analysis, which provides a small amount of essential nutrient to supply the energy within the seed itself.

SB is a cornerstone of our produce programs with it’s low cost per acre, ranging from less than $4.00 to $7.50 per acre, it’s also widely used on row crops such as corn, soybeans, cotton, and grains.  Not only does it provide an immediate stimulation to emerging roots, MetaboliK SB aids in creating a zone of enhanced biological activity so that additional nutrients are made more available to the young seedling, and with stronger root “push” will also aid in offsetting side wall compaction, which was discussed on page 2. 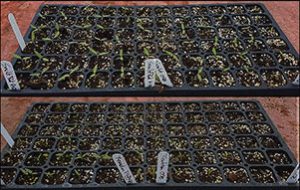 The picture at right illustrates trays of tomato and pepper seedlings at the PSU SE research station.  The left half of the trays where SB was applied show earlier emergence and improved vigor.  These seedlings will be gown for several more weeks, then dissected to measure and weigh individual plant parts.

This project is similar to one we performed in 2008 with field corn. We had read, according to corn research, that early root formation (radicle and seminal roots) was dependent upon the “energy” in the seed itself, and not impacted by nutrition in the soil solution surrounding the seed.  We found this was not true.  In our study we were able to achieve a 5.17% increase in the mass of the radicle (the anchoring root moving downward from the germinating seed), and a 20.48% increase from the seminal roots (the lateral roots above the seed), and a 34.83% increase in above ground, green plant tissue.  Additionally, although not measured there was a noticeable improvement in the development of nodal root buds, which would develop into the true feeding roots of a corn plant. 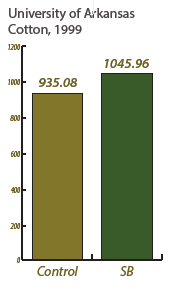 This early increase in early vigor and root formation explained to some degree the significant yield increases we had seen with corn, cotton, and other field crops.  In lighter soils we had recorded as much as 20 bushel per acre increases, and in heavier soils from 7 to 9 bushels more corn.  The graph at left illustrates 1999 research with MetaboliK SB at the University of Arkansas Keiser Research Station (average of four replications).  Cotton is very sensitive seedling, reacting negatively to any adverse weather conditions.  Many of the older cotton growers used to say, “cotton is a plant that comes up looking for a place to die’.  With an increase of more than 1,000 pounds of lint/acre, this was very profitable.

SB is also a very versatile product as well as it mixes with all liquid fertilizers for in-furrow, or 2X2 placement for corn and other row crops, applied as part of a transplant solution or drip fertigation, and is even used as a bio-brew foliar supplement with many of the produce crops.  It’s also part of our product Pow’r Pak which has shown strong results with row crops.  In lighter sandy soils to high sodic clays, Pow’r Pak has shown to provide more uniform and vigorous emergence, and very profitable yield increases.  With spring planting conditions, often being rather cold and wet, the addition of MetaboliK SB or Pow’r Pak can provide assurance that your crop will have the strong start it needs to support high yield potential.  Coupled with the ISP plant foods, or your own liquid fertilizer, they make economic and agronomic sense.

Scroll back to top