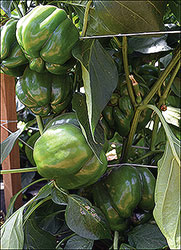 Growing vegetables indoors in high tunnels and greenhouses often provides opportunities to produce longer season, higher quality crops at higher densities and greater yields when compared to ‘outdoor, in-soil’, production.  Many growers successfully use the soil in their greenhouse or tunnel, but there are some major advantages to growing in a well-constructed artificial media.  As in the move from outdoors to indoors, production in an artificial media as compared to soil culture often results in higher quality produce and greater yields.  The primary factors in this advantage come from being better able to manage plant nutrient needs and the amount of air that can more easily circulate through a well-structured growing media.

So the question, “what are you buying when you purchase potting media?” While all commercial media come with a nutrient ‘charge’, this does not last very long as there is nothing to hold the nutrients in place as the particles dissolve, allowing the nutrients to be part of the soil solution.  Organic media often uses animal manure-based compost for some or all of the nutrient charge.  These materials last longer than most conventional sources, but that is often only a small portion of the media.  Since the nutrient charge is short-lived that can’t be what we are purchasing, as we are constantly renewing it through fertigation.  In effect, this means that we are actually purchasing structure.  The reason media companies make so many types is that different crops and different plant growth stages can be optimized by varying the soil structure.  One other note is that there are multiple research papers indicated that in any media, the addition of 4 to 8 ounces of SiGuard per cubic yard will be beneficial.

While there are many variations on this basic theme, growing media can be roughly categorized into 3 categories; 1) Fine, which is best used for seed starting and rooting cuttings. 2) Medium, which is often considered ‘all-purpose’ by many growers. 3) Course or high porosity, which are ideal for crops that will be in place for many months (like fruiting vegetables), hanging baskets, and large containers.  Begonias and Geraniums prefer a media with a slightly higher pH than most other annual flowers, but media pH is largely managed by the irrigation and fertigation solution pH as the lime, gypsum or dolomitic lime charge is rapidly either flushed out or used up.  The secret that large container growers all know sit hat high porosity medias work best where a crop will be in place for a long period as in tomato, cucumber, and pepper production and where there is an economic reason to reuse the media.

The problem with using an “all-purpose” media in large containers is that it does not take long to lose air space within the media as the peat moss biodegrades.  All-purpose media is just made of two ingredients, peat moss and perlite (hence the name “peat-lite”) plus a little nutrient charge and sometime$es a dash of bios.  These blends work reasonably well over a wide range of uses, but over multiple months and potentially multi-season usage, the primary reason that medias are so useful, the air space, is lost.  High porosity (HP) blends on the other hand, typically contain coir (waste from coconut husk processing) which degrades very slowly and can aid in rewetting, composted bark fines and mediums which create most of the air space, plus 30-50% of the same ingredients as peat-lite blends.  High percentages of composted bark and coir create massive amounts of air space that lasts for a long time and can be reused often unless a soil-borne disease finds its way into your production area.

The large air spaces in HP media also drain faster so these type media tend to dry out faster.  This is huge advantage during early and late season production when we get so many cool, cloudy days as it’s much easier to manage a drier soil under these conditions verses a finer soil that holds onto water tightly.  Also, air flow through a root system is very important for overall root and soil health.  Aerobic conditions slow the development of many root diseases and increase root growth.  The only challenge that HP soils present is during hot sunny days when plants are growing rapidly and the demand for water is high.  HP media requires more frequent waterings.

Artificial media is one of the major economic inputs when moving from soil to pot-based culture.  At approximately $3.00 per cubic foot, a single 5-gallon pot can contain $1.50 – $2.00 worth in media.  It is possible to get 2 crops per season in an indoor cucumber operation and reuse a good HP media over 2 or more seasons, so the cost of media replacement would mount rapidly if not reused.  Sanitizing the filled pots between crops with a peroxy-acetic acid drench, solarization, or steaming are excellent practice to keep a media in top condition.